THE SECRET LIVES OF PLAYLISTS by Liz Pelly

THE SECRET LIVES OF PLAYLISTS by Liz Pelly

Since many years ago, the early beginning of the so called streaming services, period when I was still producing 2 record labels digitally, I was sure that so called “care for the music fans” and music lovers, on more easy and cheaper way to find new favourite artists and listen more music, was nothing else but just next money project of gang of corporations who don’t care for nothing else but the money. The new cultural movement they were talking about was nothing else but smart marketing.

Over the years I was shocked when ever I listened to some of Spotify already created playlists and especially from the genre mixture and songs selection, I have even heard Guns ‘n’ Rosses in Coctail jazz playlist. This morning I read a article that confirmed all of my doubts and answered most of my questions. It was so well explained and written article that I have decided to share with you. Of course I checked if I can do this, is Creative Commons CC BY license and is written by Liz Pelly in www.cashmusic.org

Here is the whole article: THE SECRET LIVES OF PLAYLISTS, I just used some of the points and truth she provide there.

Not all Spotify playlists are created equally. To begin understanding this, look at them closely. Literally. Choose a playlist in Browse, and look at its cover art. Look in the corner for a logo. Look at another. Look at all of them.The vast majority of their square, tinted, Instagram-like front covers will wear a tiny Spotify insignia, that little circle with slanted waves-the artist who designed the logo says it is a visualization of streaming. On other playlists, you’ll occasionally notice different logos: the thick cursive word Filtr, the all-caps logo for Topsify, or simple rounded text reading Digster. These are the playlisting brands owned by the major labels: Filtr by Sony, Topsify by Warner, and Digster by Universal. Very rarely you might see an independent label or brand logo.

That majors own their own playlisting companies servicing Spotify, and that these major-owned playlists have prominent placement within the platform, should come as no major surprise: Spotify is largely a collaboration with all three major labels. But for me personally, as I itched to learn more about industry insider backdoors to Spotify playlists, learning about Filtr, Digster, and Topsify was illuminating; the beginning of my journey attempting to unpack this mystified world. As it turns out, these privately owned brands barely scratch the surface of what’s at play. 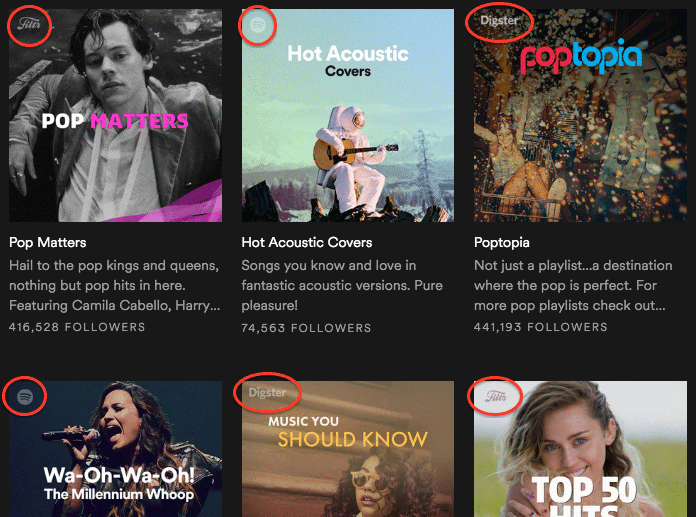 Spotify is currently striving for a never-before-seen level of authority over how music is distributed, discovered, and paid/not-paid for. Its ultimate goal is seemingly to build brand loyalty in the “magic” of Spotify, to embolden that authority. Playlists are the top tool they are currently employing to expand their platform empire. To interrogate the world of playlists is to interrogate the world of Spotify and its unprecedented grab for power and control in music.

If you open Spotify right now, the first thing you’ll see is “Browse”. The Browse page, launched in 2013, is how Spotify channels mood and genre playlists, algorithmically created “discover” suggestions, a curated feed of New Releases, charts, and a concert feed based on listening. At the top of the page, you might see New Music Friday, #ThrowbackThursday, Good Vibes, or Acoustic Summer. Chances are you’ve seen Today’s Top Hits, Rap Caviar, or Rock This, three of the platform’s most popular. There is a different Browse page in every country where Spotify exists.

What are we looking at when we open Spotify? How did it get there, and on whose dime? Who owns visual real estate on Spotify? How do major labels control what the average Spotify listener is being fed? Who is shaping Spotify’s so-called “editorial voice”? Why is it so hard to tell which playlists are curated by humans and which are curated by algorithms? And how is the latter increasingly shaping the former?

“Spotify basically owns all of the visual real estate and the playlists,” explains a digital marketing staffer from one of the major labels, who wishes to remain anonymous. Let’s call him Jeff. “That’s all the Spotify staff curating that, and they’re investing weekly marketing updates from labels and distributors saying, ‘Hey, there’s a new Lorde song coming in three weeks.’ They sort this information and decide what gets placed on the New Releases home page, and what tracks get put into different playlists.”

Browse was partially created by employees of Tunigo, a music recommendation app acquired by Spotify in May 2013, and followed the introduction of Discover and Stations. When Browse launched, the idea was to help users discover playlists created by Spotify staff as well as the best user-created playlists. But over time the latter priority has taken a backseat in favor of boosting Spotify brand loyalty.

“A few years ago, it was more of a wild west in the playlist world,” says Jeff, explaining that companies like Filtr, Digster, Topsify could exist and gain traction, as well as individuals who could create playlists that users could find through Search. “If I wanted to find a psych rock band, I could say, ‘Okay, Joe in California actually was one of the first people to make this playlist and it has 50,000 followers’. There was a function – and labels were doing this – where you could message people within the client. I did this with my band. I would find someone with an Indie Morning playlist that had 5,000 followers and send them a message saying, ‘Hey, check out our song, put it on your playlist if you want.’ And a few people did.”

Jeff puts Filtr, Digster and Topsify in the same camp as average Joe in California, but of course that’s not the whole truth. These are huge companies. And the major label influence within Spotify is unsurprisingly vast. The majority of the so-called “editorial” content is shaped by Spotify’s relationships with the major labels and if not directly, then indirectly, a way in which they uphold the marketing agreements within their deals.

“When Spotify launched, the major labels had to sign deals to license their content,” Jeff says. “Part of that was that the labels have access to gratis advertising inventory. So if you’re a non-paying Spotify user, and you get an ad for McDonalds, and then you get an ad for Ed Sheeran, the Ed Sheeran one is coming through Atlantic and Warner Music Group. Because they have that inventory every month. The majors also bought Topsify, Digster and Filtr. These were independent companies that were early on Spotify.” They already had large followings, hundreds of thousands of followers, and thousands of playlists.

Outside of the Spotify staff-curated playlists, those curated by Filtr, Digster and Topsify have more visibility on the Browse pages than any other playlisting brands, individuals or labels. With these playlists, employees of Filtr, Digster and Topsify can simply log in and add tracks. “Things like Topsify, Digster and Filtr remain good resources, especially for [major label] developing artists,” says Jeff. “I know that I plug in such-and-such track to five [of our] playlists and start to rack up some plays, some revenue for that artist, get it in front of some new listeners, and you also get some algorithmic stuff going. Like Release Radar and Discover Weekly.” By using Filtr, Topsify and Digster playlists to generate activity on their own material, the majors effectively use these playlists to pump their artists into Spotify-owned algorithmic playlists.

“All of the major labels get an allocation of Home Page Takeovers that we pay for,” says a major label playlist brand employee who wishes to not be named. Let’s call her Carrie. “They decide between the curation, sales, and marketing teams what playlist or collection of playlists they’re going to promote that day. We’ve got some quite intelligent backend add systems, so we can actually change what you see depending on what time of day you log in. Mobile Overlay is also really important for us particularly within Spotify.” Carrie curates roughly 30-40 playlists spanning decades, moods, activities, and genres, working globally on Spotify, Deezer, Apple and Youtube. She also is part of her label’s international marketing team.

Carrie, whose background is in radio, calls making a playlist a “brand building exercise”, thinking of all the components that make up a playlist’s brand: the artwork, title, description, first block of songs. “Whether you’re listening to Today’s Top Hits or Pop Rising or Rocked, if you’re not going to go back and get the best experience for that mood or genre, regardless of who the owner is, [users] will see through that,” she says. Carrie’s job, of course, is balancing her playlist brand building visions with her label’s business needs. 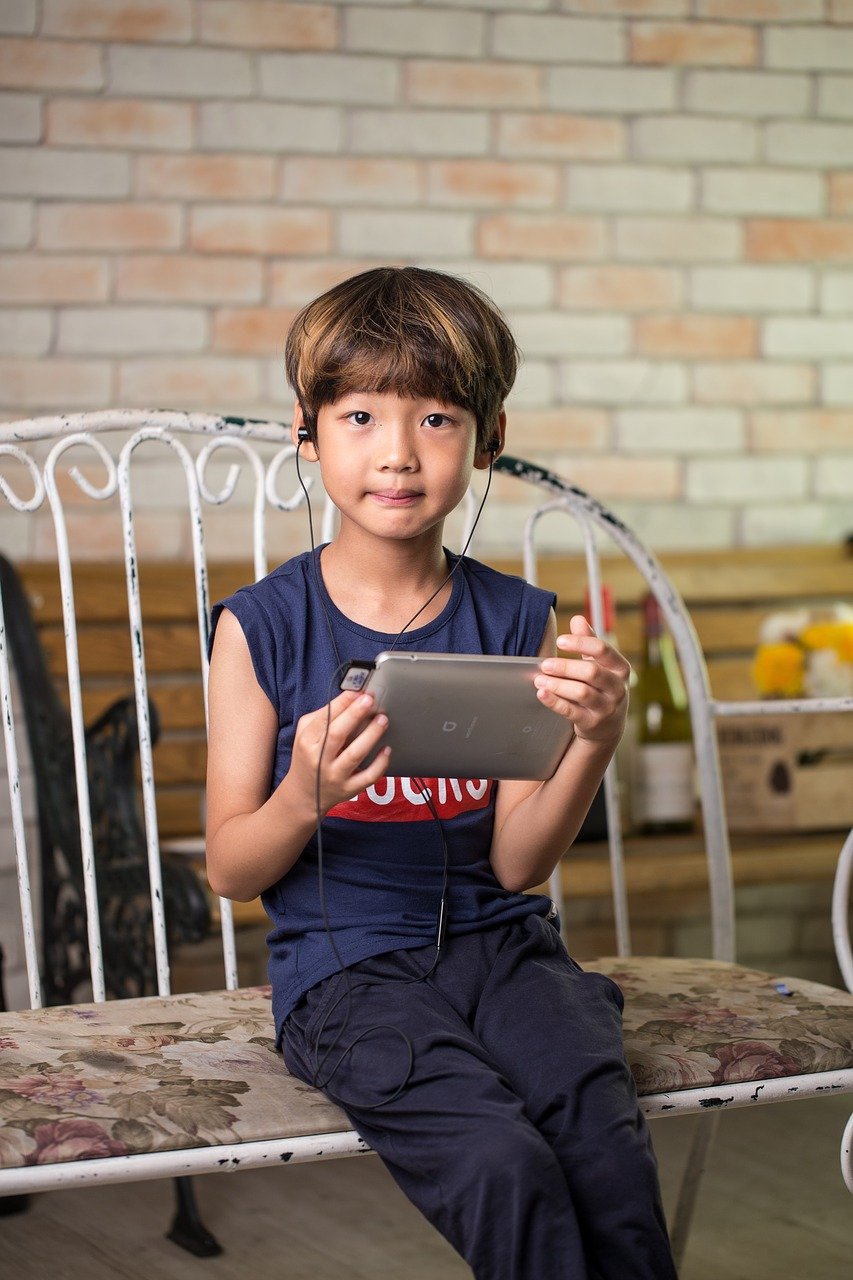 While some major-label entities have their own Spotify playlist identities, like Sony Music Classical or Sony Music Gospel, the playlist brands (Filtr, Digster, Topsify) seem intentionally disguised. “[It’s] almost like a Procter and Gamble,” says Carrie. “Procter and Gamble own all of these major brands, like Pampers and stuff like that, but no one really knows who Procter and Gamble are. That’s the ambition. [We are] the parent brand, but it’s not the main one that we’re pushing out there, or the one that we want all of our users to connect with. It’s just kind of the name for it.”

There are challenges for any labels and artists of all sizes when navigating Spotify, says Carrie. For example, Spotify controls what their cover images look like. “We are restricted within Spotify for certain rules and guidelines,” she says. “We can’t put font in certain places, we can’t use certain color schemes that are too similar to Spotify’s. There’s a whole guideline that helps steer where we have to go picture-wise.” Carrie explains a recurring “Browse pitching process” where playlist brands will pitch their playlists to Spotify, who decides what ends up in Browse. “You try to present it in the best light, like how many followers, how many streams. What is the history like? Is the graph of growth going steadily up or did it actually peak this time last year? Have the audience lost interest in the name of the playlist or the style of music, or perhaps are you as a company not putting enough effort into it? They will analyze it. But they are currently not open for any pitches for Browse submissions. I don’t know if that’s going to happen in the foreseeable future, but I imagine they will because it hasn’t been updated for some time.”

When tracks have a higher number of playlist placements, the song’s general ranking and chances of appearing on Spotify’s algorithmic playlists will increase. The position of the song on its playlists (whether it appears in position one, or position two, or position 27) also boosts its odds at getting on algorithmically made ones, Carrie says.

Majors can put money into their Filtr, Digster or Topsify playlists through paying for marketing. “With any playlist you need to build that brand over a longer term or with off-client placement (such as a magazine or via being a personality) or pay to feature in HPTOs [home page takeovers] or other to build awareness,” says Carrie. “Especially if your playlist isn’t in Browse, people can’t find it very easily.”

Is long and detailed article, rest you can read… (here)